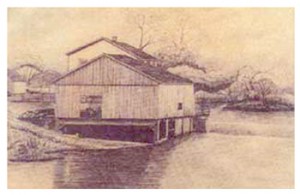 In 1830 Titus King moved to Richland Township in Marion County and invested $500 in eighty acres of virgin forestland. This land ordinarily would have sold for about a hundred dollars; but because the Whetstone River (later named the Olentangy) flowed through it, with sufficient fall to furnish power for the operations of mills, he paid the additional price. These were in the days prior to the advent of steam power, so this was a valuable asset. He built a sawmill and a wooden factory on this site and they were known for many years after as King's Mills. 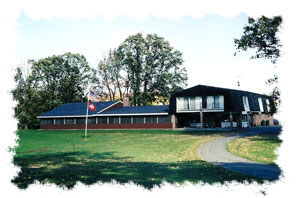 In 1960 John and Jean Russell purchased 160 acres of farmland known as Kingsmill. The front nine holes of the golf course was built in 1965 and opened on Memorial Day in 1966. Designed by Jack Kidwell, the front nine was added to with an additional nine holes designed by John Russell and Ted Cox. This opened in 1973. The original club house now occupies the bar. A two-story addition was built in 1971. Linda and Richard Krom purchased the course in July of 2017 from the Russell family.